Here’s a sassy orange tulip I saved from the deer. I have two blooming, and one that will probably get away with making a flower. The others have had their heads bitten off.

I’ve been getting into the gardening magazines, getting inspired by projects. I don’t subscribe anymore, but still have a stack never read. So, I’ve gone through my garage, finding every pot or article (large pieces of pipe, an old dryer vent), that could be spruced up with craft paint. At the left is nothing but a shrub-sized plastic pot, such as garden centers use. Here’s one kind of recycling to keep plastic out of circulation altogether! The paints are Martha Stewart metallic and pearlized, and the decoration is done by dipping crumpled plastic wrap in contrasting colors after a base coat dries, then tamping on the freeform design. When they’re ready to go out, add a coat of car wax, to make them more rain resistant. 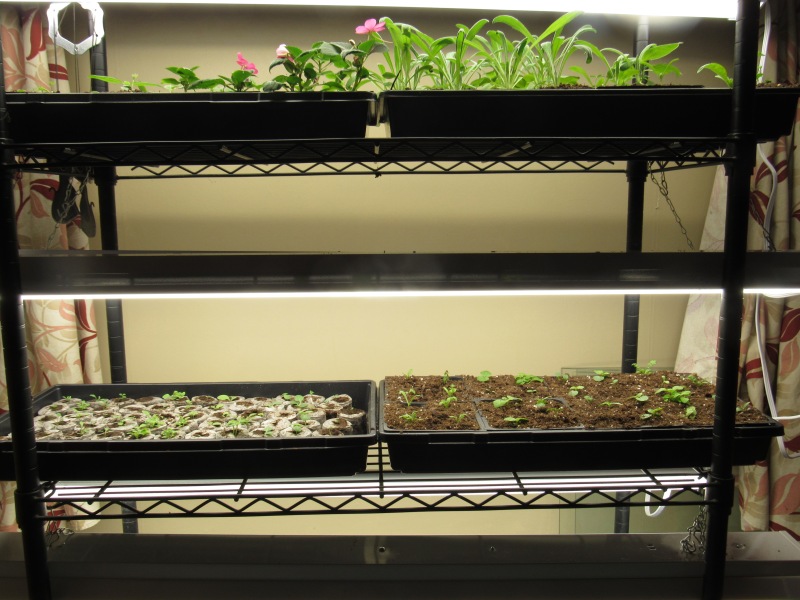 Here are my garden seeds, sprouted and on their way, after two weeks. It’s something of a balancing act to get them early enough they have a healthy amount of growth, comparable to plants you’d buy at the garden store. But growth is especially important with perennials. Last year, for example, I put out probably a dozen hollyhocks, which like most perennials won’t bloom the first year. This year, I count less than half that number surviving, from voles and deer, and crowding by the roots of other plants. Last year’s achillea (deer resistant) has pretty much all come back, but this is the first season they’ll bloom. I had good monarda (also deer resistant) last year, a plant that will flower like an annual, but this year a couple stands don’t seem to have returned. But since even tender annuals can go outdoors in April during the daytime (unless the temperatures are below the upper fifties), it’s better to start early, and have big plants that will bloom as soon as possible.

Seedlings, though, then young mature plants, do get to be a lot to handle indoors.

And by the way, the impatiens flowering pink, above, are from cuttings. They’ll grow easily that way—just snip a top with buds, making your cut between two sets of leaf nodes, and stick it in potting soil. It will root and start blooming within a week or two. The downside is that cuttings are clones. Impatiens are also very easy to start from seeds, and that genetic diversity will improve their chances of not picking up disease.